Lithuania is the biggest of the three Baltic Countries on the eastern shore of the Baltic Sea. Lithuania shares borders with Latvia, Belarus, Poland and Russia (Kaliningrad). The country is full of preserved natural landscapes, woods, lakes and rivers, and has an unique sea side, with the Curonian Spit, a sandy peninsula, isolating the Curonian sea from the Baltic Sea.

Alhough Lithuania was mentioned as early as 1009, it is now a young republic, trying to recover from the grinding occupation by the Soviet Union. Independence was restored only in 1990, but the history of Lithuanian statehood dates back to the 13th century, when Mindaugas, the first and only king of our country, gained the crown. The history of Lithuania is erratic, full of mighty victories and severe setbacks. Today’s Lithuania is a small country, but in historical maps you can find it the biggest country in Europe, or not existing at all. Today the country, still under the impact of 50 years of Soviet occupation, tries to blend into the economic and cultural space of the European Union.

As one of the most recently Christianized countries in Europe, Lithuania preserves much of pagan traditions, and folk traditions are still alive in villages. The cultural life prospers in all the bigger cities.

Vilnius is the capital of Lithuania, and its largest city. The first known written record of Vilnius as the Lithuanian capital is known from Gediminas' letters in 1323.

Today, Vilnius is one of the most frequently visited cities of Eastern Europe. It draws attention not only because of its unique architectural character, but also by its cultural events and attractions. During the first ten years of independence the city has become a tourist attraction centre. It is therefore not surprising that during these ten years the number of tourists has consistently increased and at the same time tourist infrastructure and services have been developed.

Vilnius, as the capital of Lithuania, is the home of the President, the Seimas (parliament), the Government, and the Supreme Court. Diplomatic missions, educational, cultural, financial, research, and healthcare institutions are based here.

Vilnius occupies an area of about 400 square kilometres, of which approximately 29% is developed, the remainder being green space (69%) and water (2%). The historical centre of Vilnius, the Old Town (Senamiestis), is one of the largest old town centres in Eastern Europe, covering almost 360 hectares. The Old Town is situated in a picturesque valley of two rivers, the Vilnia and the Neris, at the meeting of trade roads, next to the ford, which was guarded by Vilnius castle in the olden times.

Vilnius is a cosmopolitan city with diverse architecture. There are 65 churches in Vilnius. Like most medieval towns, Vilnius was developed around its Town Hall. For more information on Vilnius please visit www.vilnius-tourism.lt/presentation/site.html. 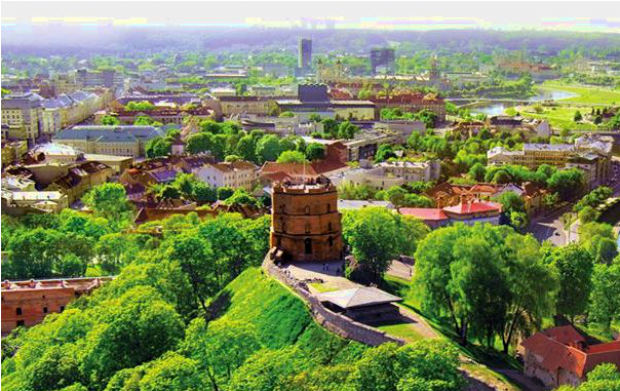 Trakai
The old town of Trakai, which is extremely popular with Lithuanian residents and foreign guests, is situated west of Vilnius between the hills, forests, and lakes. The shores of the peninsula on which it is located are washed by the waters of Lakes Galvė, Totoriškių and Bernardinų (Lukos). This town, famous for its picturesque landscape and the legendary Trakai Castle, was a cradle of Lithuanian statehood, an important military and political centre, headquarters of the Lithuanian Grand Dukes, and the capital of Lithuania. Today, Trakai attracts visitors to a wonderful place offering refuge from a hectic city life, with walks around the beautiful area or yacht trips on one of the numerous lakes. Trakai is also known for the Karaimes (a people speaking the Turkic language), who have lived there since the 14th century and have preserved their traditions. The kenesa, a Karaime sanctuary, and houses of Karaimes have survived in Trakai, and the national dishes (the most popular is kybyn – a small pasty stuffed with minced meat) of this ethnic group can be tasted at the Karaime Restaurant.

Kernavė
Kernavė, a small town situated on the right bank of the Neris River 35 km from Vilnius, was one of the first centres of the State of Lithuania in the past (13th century). Pajauta Valley is shrouded in legends, and five hill forts at its edge protect the remains of the capital of the last European pagan state. The State Cultural Reserve of Kernavė was founded in 1989. The present cultural reserve, covering an area of 196.2 hectares, and a UNESCO World Heritage Site since 2004, harbours complex archaeological strata from prehistoric times, and the entire area is used only for cultural tourism and scientific research. The exceptional world value of the place is the continuity of its settlement from the late Palaeolithic age (9th century BC) up to the present day.